Breed begrip: an instant jazz trio on a rainy roof in Amsterdam Bijlmer. Enveloped by the smell of chocolate brownies, the sound of heavy summer (?) rain, and the curious attention of a varied audience, saxophonist John Dikeman, cellist Raoul van der Weide, and I, drummer Robbert van Hulzen, improvised a half-hour long set of high-energy honks, heavy grooves that didn’t quite add up, crackles in honour of Michel Waisvisz, hisses of unknown origin, and gooey drones. 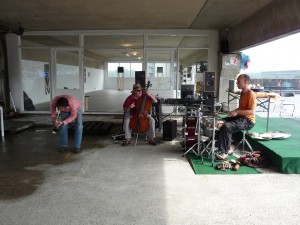 Our performance was part of the almost-weekly events organised by independent artists’ collective fatform: “an art project that challenges the idea of a traditional platform and at the same time uses its basic functionality. Local and international artists meet, exchange, exhibit and perform together during the whole summer at one of the best underground locations in Amsterdam: the rooftop of the Kraaiennest Shopping Centre in Amsterdam-Zuidoost.” The idea is to attract audiences from diverse backgrounds “such as contemporary art, biology, hip hop, new media, philosophy, performance and reggae”, which are “encouraged (or basically forced) to at least have a peek at the other”. Or, in this inescapable case, listen to us. Fortunately, the idea is “to not try to minimize these incompatibilities [originating in the different backgrounds] but rather we would like to propose a form that is FAT enough to contain all radicals.”