After arriving in hot and bone-dry Suleymaniyah a week ago I unpacked half my backpack, met up with my fellow musicians (happy reunions and pleasant nice-to-meet-yous), and we started working. We had a week to come up with a repertoire for the band, and were also intitiating a small group of enthousiastic local percussionists in the ancient arts of Indian rhythm and Balinese monkey dance. Lots to do. But on Tehrani percussionist and old friend Arash’s insistence, we took a one extended lunch break at the bazaar after a few days.
The core of our excursion was a visit to the legendary Shaeb Chaikhana, the People’s Teahouse. Frequented, supposedly, by artists and intellectuals (the male variety) who all drink strong black tea with too much sugar (“don’t stir!” is the advice to non-suspecting foreigners like yours truly) from iconic hourglasses and play backgammon and dominos. The noisier the better: the incessant banter and thick cigarette smoke are complemented with the clack-clack of ivory on ebony boards. (Or is it just wood and plastic.) The walls are lined with portraits of a whole variety of writers and thinkers and other inspirational characters, including a Dutch journalist who died here a few years back – the only woman to be eternalised on the walls here. Or, for that matter, to be seen anywhere on the premises. Arash, full of initiative and unafraid as always, went straight to the proprietor, shook both his hands and with his beautiful mixture of enthousiasm and humbleness asked him if we could come and play.

The only thing the man needed to know was when, the if was clearly not an issue. We settled on Thursday, panj shanbe in Farsi and something close enough in Kurdish.

A few days later we arrived at the teahouse with our cajon and jew’s harps after a hilarious taxi drive. We set up in a corner and started playing. I had no idea what to expect – would the be annoyed? amused? would they ignore us or enjoy our music, tell us to stop or buy us tea? Turned out we were actually quite welcome: while a large number of men simply continued playing their games, others came and stood around us, applauding enthousiastically and indeed bringing us more hot and sticky glasses. We tried out our mouth harp feature, which we were working on for the Caffe11 gig. We call it the lab chang concerto. (The actual Farsi name of the instrument is zanburak, but Arash prefers its Tajikistani name. And by doing so confuses the earwax out of everyone.) 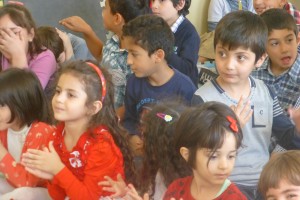 Besides the teahouse king, one of our new best friends here is the dean of the French school. We met her in the garden of Caffe11 one afternoon and got talking, like you do. We (enthousiastic Arash again, to be precise) offered her to come and play for her kids, and indeed we spent a lovely morning with some fifty kids of primary school age, clapping and moving along to the music. The tallest girl (you know how girls at some point just shoot up, becoming a head taller than all the surrounding boys?) shyly asked if she could do a très court dance and, armed with our visiting friend Neil’s FC Utrecht scarf, started moving to the music gracefully. To be joined within minutes by almost the entire group, to the amusement and endearment of most (including us, obviously) and the disapproval of some of the stricter teachers. Though rowdy clapping and yelling was acceptable for everyone. 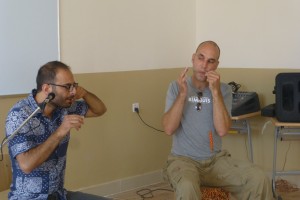 Yet another expedition led us to the College of Fine Arts. Filming outdoors on the campus was no problem for the pointedly present police (bullet proof vests and guns that put me straight back in Pakistan) but the school’s security staff came and told me off. Once inside, we found ourselves in front of a crowd of students of composition, performance, and ethnomusicology. We had a nice chat about their views, methods, expecations and so on, including a discussion of the term ethnomusicology. Not a favourite of mine, but they insisted that it was important as the additive “ethno” indicates that there is fieldwork involved, rather than the pure literature study they considered “musicology” to be. Unfortunately we couldn’t play “just yet” and were also not allowed to film. To discuss this, we were introduced to their professor. A brilliant man who studied composition in Belfast and played us a beautiful (and very advanced) string quartet he wrote for the Arditti Quartet a few years back. He somewhat reluctantly gave us permission to film at least our talks with the students but when we got back to the students’ classroom they’d all left for lunch. We were expected back at the ranch too and left, happy with the chats and hoping to keep in touch with dr Abdullah.

And after all this, we’re now getting ready for tonight’s festivities here at Caffe 11. Looking forward, excited and curious how we’ll get through the repertoire of diverse and sometimes fairly complex pieces we whipped up in the last week. Khaheem deed, we shall see. (Yes I know it’s Farsi but enough people here speak the Iranian language and enough Kurdish words are pretty close to give me the idea that linguistically I at least somewhat relate to where I am.) A report, including a short documentary about the whole project, will follow shortly, inshallah.