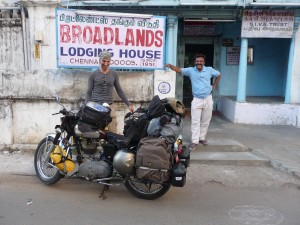 I was planning to leave at check-out time. 11 am. So, perhaps unsurprisingly, after postponing waking up for half an hour and taking my time packing, I left my luggage in Klaus’ room and tied the suitcase that lives in Madras onto the bike to take it back to the studio – tried to get a rickshaw but they were on strike till 6 pm. Grr. But actually nice, a last bit of riding in Chennai. Lunch at No Reel Corner, around the corner from Maarten’s studio that was half my home in the last five months, was good as always, and equally unsurprising was the espresso at Barista’s on Khader Nawaz Khan Road. I spotted a cybercafé and since I had no idea when fast internet would be available again, I spent a few hours uploading clips and tracks of the first Elephant Songs, that took place in Bangalore the last two weekends.
I had a vague idea I’d be doing the usual: take my time in the cool part of the day and go outside when it’s hottest, around and after lunchtime. Fortunately, after loading the bike and chatting to fellow Broadlands inhabitants, it was already five o’clock, the heat was disappearing and the shadows were longer. We said our goodbyes and I wobbled nicely down the beach road, past the San Thomé Cathedral (again not visited this time, despite really liking the place when I discovered Madras in 2000) and across the bridges. Took a left to Elliot’s Beach for a final Barista moment (mostly because I simply really like Elliot’s Beach). Puffed up with pride when someone started talking to me because of yesterday’s article in The Hindu but slunk away to order my coffee when his attention, photographs and all, was aimed exclusively at the bike – by whose numberplate he’d recognised me to begin with.
Rode into the fading daylight and of course got lost. With lots of friendly help I eventually turned onto the ECR – to find out the bike still doesn’t really want to do more than 60 kilometres an hour, 70 max. When I open the throttle, it speeds up as expected, until the increase suddenly stops. More gas doesn’t seem to make a difference. Or do I not dare to try hard enough? Better get the timing checked & tuned tomorrow. Is that stronger shaking, especially at low revs, because of the new, larger sprocket or does the time of the spark, and thus the explosion, also play a part in that?
At some point the engine just died, after having been feeling uncomfortable for a while. Turned out I was very low on petrol, but this didn’t feel like just running out of petrol. Or did it? Have to get reacquinted to this bike, its smells and temperature and movement.
Arrived in Mamallapuram and a friendly American at the bus stop told me about this hotel. Acceptable meal on a rooftop, with fantastic tomato soup – actual chunks of garlic and tomato in it. Kashmiri shops and tourist-friendly restaurants with matching prices down the whole street. Lots of dreadlocks, flowy cotton clothing, and bare tanned arms. An Israeli with a bushy beard and mourning eyes tried out the overtones on his plastic recorder in a shop door. Am I back in Thamel? Ah no, they have a beach here. With cows, of course. Having dinner in the sea breeze is a good feeling.