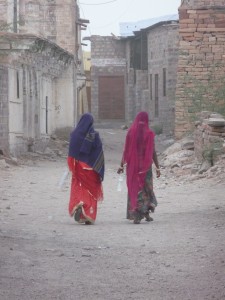 After taking my morning pictures, I knocked on a few doors, hoping to find someone to unlock the door to my bike. Everyone I talked to seemed to understand what I wanted, and then disappeared without anything happening. Eventually another hotel guest talked to some of the people, and the guy who was in charge turned up, fully clothed, washed, and combed – not just recently awoken at all. He quickly left and returned with a large blue bucket, and went into my room. After some more shouting from the other guy, this confusion was cleared up too, my bike was liberated, and I could leave this charming little town called Balesar.

The landscape changed every kilometre. It’s amazing how many faces the desert has – of course there’s the dry sand dunes that I imagined, but it’s so much more alive too, sometimes making me wonder if this actually was the desert. I guess it all comes down to how stuck you are in your definitions. 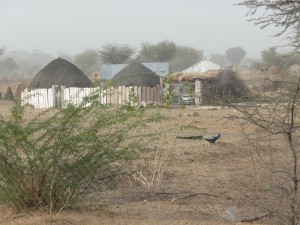 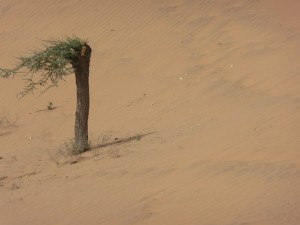 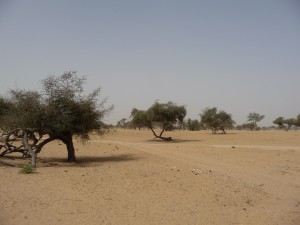 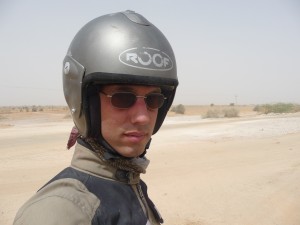 A long tea break with my book and several cups of tea and a lot of water on a charpoy in the sun warmed me up after going against the strong and cold wind for a few hours. This desert air is too dry to retain any temperature – freezing until the sun is out, and then it burns. 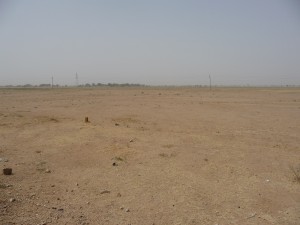 After Bap, the landscape opened up into endless fields of rocky sand with a little vegetation. Here and there enormous waterbuffalo and skinny cows were munching on the leathery bushes.

Takes some getting used to, all these animals on and right next to the road.
Dogs are smart: they react to horns and generally take the shortest way out. Cows are too thick to react to anything until you’re very close, then they panic and trip over their own legs. Goats are too arrogant to react to anything, but too clever to get run over. Sheep get very nervous when separated from other sheep. A specific, and very tricky, kind is mainly found near road crossings in villages – men with big bellies who cross without looking. The extent to which they lean backwards is an indication of how important they are, and is inversely proportional to the likeliness of them moving out of the way for traffic. This, like so many others, is the time for pragmatism rather than principled idealism – right or wrong, running into one of these people would be a major hassle so I give in without further thought. 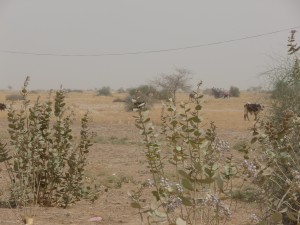 In these open fields, the wind is no longer cold but even stronger and more head-on. Every oncoming truck brings a shockwave – best reacted to by covering your mouth and gripping the bike with your thighs, rather than squeezing the handle bars and locking arms and shoulders. What was it that Ewan McGregor said? Loose hands? Open hands? 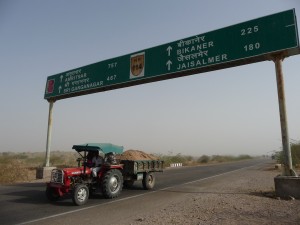 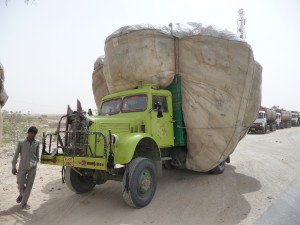 I found a nice room in desert town Bikaner. Headed out for some food after dark, and after kindly turning down an indecent proposal from a guy on a bike, I found good noodles and a lemon soda seller who produced the most amazingly loud squeek with the gas from the bottles he opened. Walking back with a full belly, the guy on the bike found me again, following me, sometimes stopping on the other side of the street, sometimes overtaking me and coming back. When I eventually asked him what he wanted, he declared he was gay. I told him I wasn’t interested, wished him good luck, and we parted with a handshake. Until that surprisingly friendly turnt of events, it wasn’t exactly threatening, but certainly uncomfortable. And it made me think about how often this must happen to women, who may not even always be sure they can probably take on whoever attacks them, simply in terms of physical strength.

I’ve been in this desert for a while now. Lets try and get into the Punjab tomorrow.

2 Replies to “the thar desert: balesar to bikaner”